WHAT EXACTLY WAS AGREED

At the planning day held in the Wellington Park I gave an undertaking that I would consider, in consultation with our information office, whether we would issue a press release or to write to community representatives to record the actions agreed on the day. I have decided that writing personally to all the known representative groups in the area is the best way to record what was agreed and to set out the proposed way forward.

The meeting with the representatives from the Village Area, who attended the meeting, was very productive and while the majority of community representatives were intent on 100% redevelopment of the area, they accepted that the regeneration must be phased. The first phase of the area to be redeveloped or regenerated by improvements to existing housing stock has already been identified by the Housing Executive. I assured the representatives that any proposals they may have on which streets to tackle first will be considered as part of a partnership approach to regeneration of the area. An Economic Appraisal has been prepared and this first phase will cost around £100 million. There is no existing funding allocated for this Urban Renewal Area and bids will have to be made by this Department. The first step will be to secure DFP approval to the Economic Appraisal and then a bid will have to be submitted for consideration ultimately by the Assembly. Vesting procedures, including the probable requirement for a Public Enquiry, will take approximately two years before any physical work can commence.

The actions agreed and commitments made are as follows:

1. Another meeting will be arranged for October to report on progress.

2. Representative Groups will identify which streets are in the worst physical condition so they can be tackled first but an action plan has to be operationally agreed with the Housing Executive.

3. I, on behalf of the Department for Social Development, will forward the Economic Appraisal to Department of Finance & Personnel (DFP) for approval. Once DFP approval is obtained I will lodge a bid for the required funding of £100 million.

I trust that this clarifies the position to all the representative groups but if I can be of any further assistance, please contact me at the above address.

" I FEEL THAT I AM BEING EVICTED "

to block up houses without consulting the residents.

The blocking up of houses is the number one factor in psychologically forcing many people out of the area. A local resident said that she felt that she is being evicted. The Blackstaff Community Development Association has a photograph of this lady as a child in the area.  "Thanks" to the blocking up of many more good houses during 2009, she faces an uncertain future. Many other senior citizens (like her) have already moved out and it may not be long before she joins them. AGE CONCERN - WHAT CONCERN ?

The blocking up of good houses in the Village Urban Renewal Area is causing distress to local residents, especially the older generation and we fear that the sight of blocked up houses will have a detrimental effect on their health. The Blackstaff Homeowners' Association meeting on 1st April 2009, agreed that we ask the Northern Ireland Housing Executive to agree guidelines, dealing with empty properties within the URA. The following are some suggestions which we would ask the NIHE to consider as a matter of urgencyin the interests of health and safety for residents and to maintain the quality of the local environment. It is our view that an empty home needs to be looked after just as much as one that is lived in.

In order to prevent the unnecessary blocking up of good houses, the following proposed guidelines were sent to the DSD Minister, Margaret Ritchie by our sister organization.

Proposed Guidelines for empty properties within the

1) The NIHE will consult with local residents regarding the securing of empty properties.

2) The NIHE will consult with the nearest neighbours either side of a vacant property as to the best way it can be secured.

3) The NIHE will respond to requests from residents to have properties made secure.

4) The NIHE will make sure that both the house, garden and yard are kept in good order. This action will help prevent pests such as mice and rats making their home in empty properties and causing a danger to public health.

6) The NIHE will make sure that the roof is in good order, that the gutters and downpipes are in good condition and are not clogged up, that none of the windows are broken (if windows are still in place) and that all the brickwork and masonry are secure.

7)The NIHE will inspect the outside of all empty properties once a month.

IT IS NOT SURPRISING THAT MANY RESIDENTS BELIEVE THAT THERE IS A PLAN TO DISTROY OUR COMMUNITY. 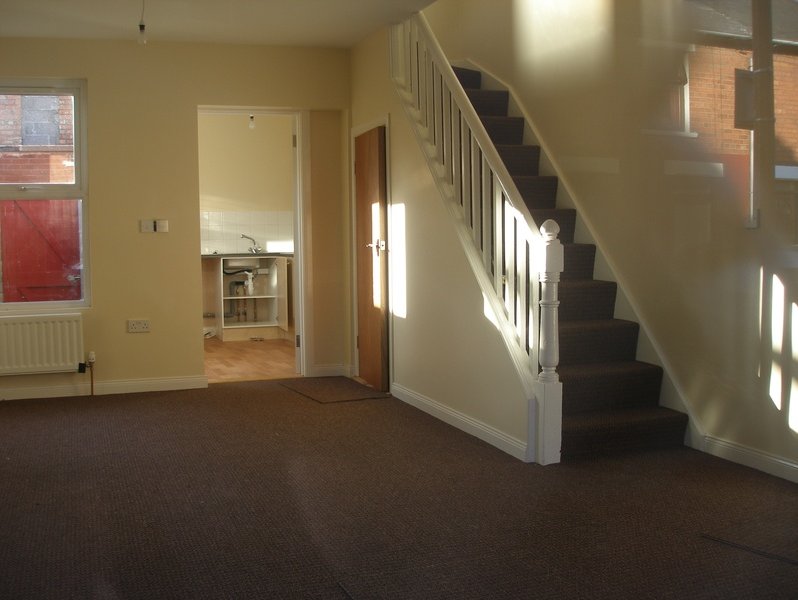 Workmen had just started work when this photo was taken.  Legally vandalising and blocking up this refurbished house at Broadway Parade. This action by NIHE was carried out despite vigorous complaints from residents in the street. Many other houses like this one in the redevelopment have also suffered from legalised vandalism.

The NIHE did not carry out a condition report on any of these houses.

Was this to hide the truth?

At the time, 129 properties have been acquired in the Village area by the Housing Executive, misusing as we believe the Advance Purchase Scheme and legalised vandalism has been undertaken on each house.  A further 12 applications were being considered and now have suffered the same fate; all  legally vandalized and blocked up.We estimate that over 300 residents have moved out of the redevelopment area and will never return.

Why we believe the Advance Purchase Scheme was misused to acquire as many houses as possible throughout the area and have them blocked up.

The NIHE Advice and Guidance booklet clearly states under the heading, Advance purchase:

"If you plan to sell your home and become aware that the Housing Executive is considering a redevelopment scheme in your area, you should contact your local office without delay to obtain advice. In somespecial circumstances, we can purchase property before the formal approvals have been obtained, in order to help speed up the redevelopment process."

A more recent booklet "Regenerating the Village Area" dated May 2008, has a slight change of words:

" If you are currently planning to sell your home, you should contact us without delay to obtain advice. In some circumstances, we can purchase property before formal approvals have been obtained. This is known as Advance Purchase." 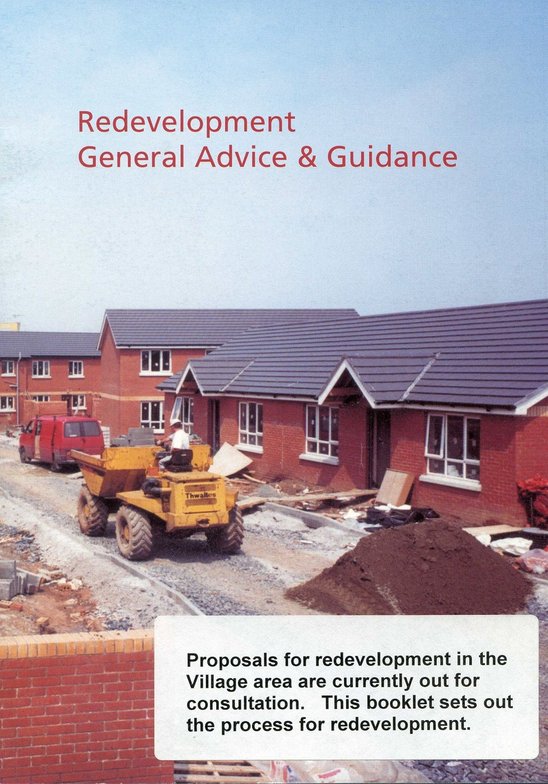 We take it that without delay means that there there is a possibility that if you don't act soon, you could be too late for Advance Purchase. Are we right or wrong?

We take it that some does not mean all. Are we right or wrong?

We take it that special means exceptional. Are we right or wrong? 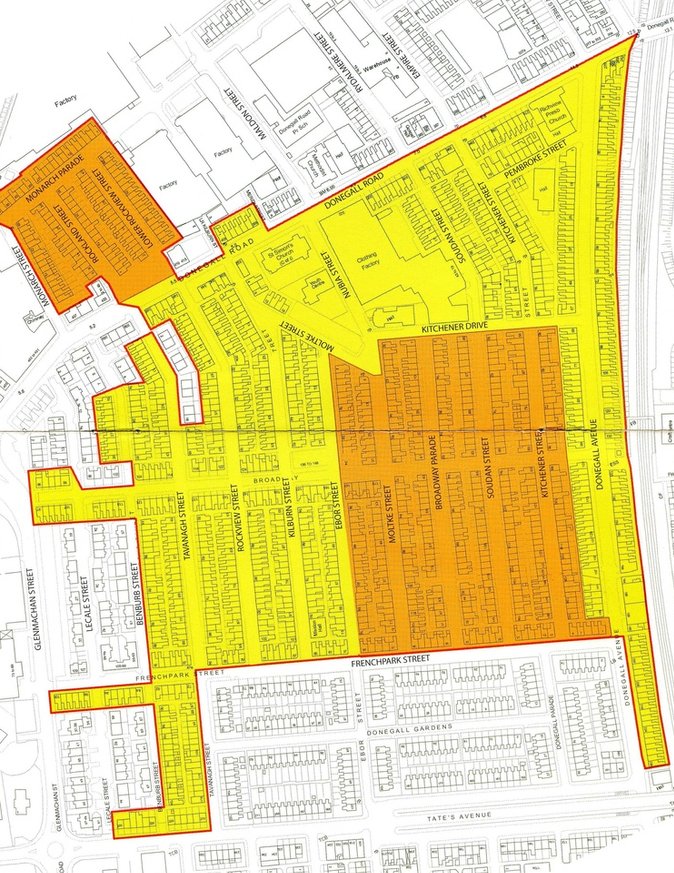 The NIHE states in their Redevelopment General Advice & Guidance publication that "We will carry out a full survey of all the properties in the area and if more than one third are unfit, we will consider redevelopment."

THERE WOULD NEED TO BE OVER 180 UNFIT HOUSES IN THE AREA BEFORE THE NIHE COULD CONSIDER REDEVELOPMENT BUT ONLY 82 WERE SURVEYED INTERNALLY.

The Belfast Telegraph reported on Tuesday, 18th May 2010:

" A High Court judge dismissed a legal challenge to a £100m regeneration scheme for a socially deprived Belfast Neighbourhood.

Mr Justice Treacy rejected the case against plans for the Village area amid fears any delay in the project would threaten its entire future.

He was told up to £17m has already been spent on buying and preparing for the major redevelopment.

A vesting order for housing stock in south Belfast area was made by former Social Development Minister Margaret Ritchie following an inquiry.

Her decision was challenged in the name of one resident whose home would be vested.

Lawyers for Louisa Blackburn argued the public inquiry was biasedand failed to properly address arguments. But stressing the rules for launching judicial reviews within three months, Mr Justice Treacy held that matters under complaint had "crystallised"well before the minister's decision last December.

The judge said the application had not been brought promptly enough."

They don't even know how many have outside toilets.

We believe that the blocking up of houses and the Advance Purchase Scheme were used unfairly to predetermine the outcome of a public inquiry or any legal action as both together "crystallized" the situation, the very word used by Mr Justice Treacy in the legal challenge (9th May 2010) by a home owner, who ruled against a Judicial Inquiry regarding the Village Redevelopment Area on the grounds that matters had "crystallised" well before the minister's decision last December. We believe the NIHE were responsible for allowing matters to be "crystallised" by pushing ahead with blocking up of good houses against the wishes of many local people and at the same time ignoring our proposed guidelines regarding securiing vacant property (1st April 2009). The first three were: 1) The NIHE will consult with local residents regarding the securing of empty properties. 2) The NIHE will consult with the nearest neighbours either side of a vacant property as to the best way it can be secured. 3) The NIHE will respond to requests from residents to have properties made secure. We believe that these proposed guidelines, if implemented would have prevented the blighting of the area and that matters would not have "crystallised". 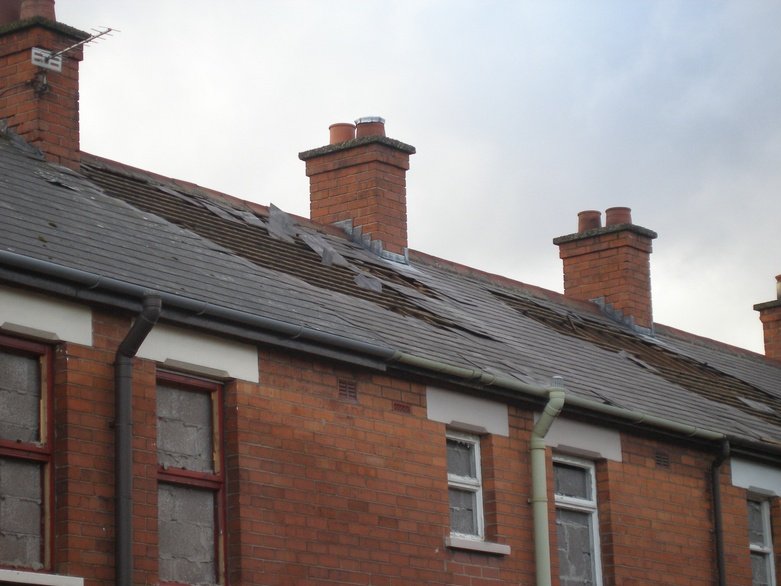 IT IS OUR BELIEF THAT THE NIHE WILL TAKE LITTLE OR NO ACTION TO SECURE PROPERTIES DAMAGED BY VANDALS AND THIEVES.

Copy of email which we sent to Liam Kinney, District Manager NIHE on Monday 8th November 2010, referring to the theft of slates removed from Soudan Street houses. See photo above.

"As you are probably aware, a considerable number of slates have been removed from blocked up houses in Soudan Street (the odd numbers side and near to Broadway). I know from past experience that the situation will get worse unless steps are taken to secure these properties. I would ask, what steps do you intend to take to secure these homes? I would also point out that there has been an increase in the number of gates forcibly removed from their posts. In addition there was a report of lead being stolen last week from Kitchener Street. The police were informed.

In August, we suggested to you that lead should be given a coat of Security Grease. We gave information that the grease had a secret DNA tracer. As an additional deterrent there should also be  large bright coloured warning signs that everything is DNA marked which should also be added to the slates and other items. We also suggested that every home in the redevelopment area be provided with a dedicated and confidential telephone number which residents could use if they see anything suspicious.

THE LACK OF ACTION

WILL CONTINUE THE PROCESS OF BLIGHTING THE AREA. 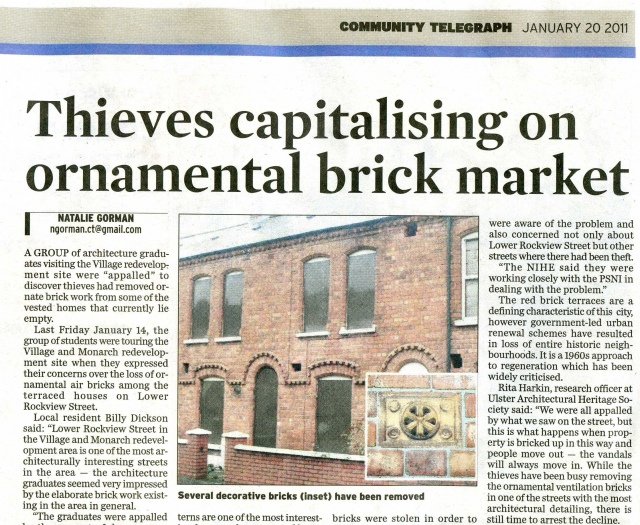 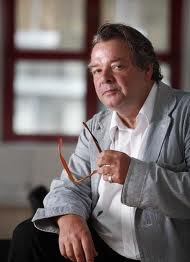 From Hope To Reality

The views of Architect Wil Alsop 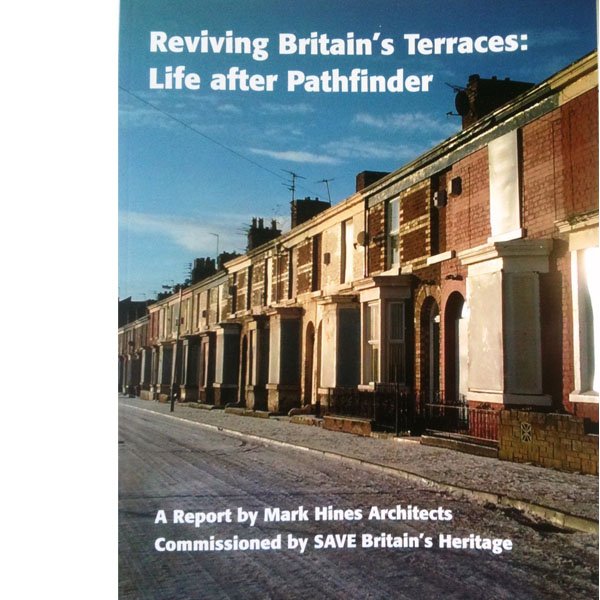 and look at 05 Saving terraced houses and 22 Life after

If you would like to comment on the contents of this website or apply to join the Blackstaff Community Development ssociation (Blackstaff Residents) then you can email feedback@blackstaff-residents.org.uk